In addition to the commands ( EDL, EDP, and EDM) the following commands to be used for editing nodes
All commands that are require pipe or selection set, user will have the choice to use filtered selection set when prompted by the command, see this for more details about NWSS

Add Node
Node can be inserted with this command; the pipe levels will be calculated but the cover level will be either acquired from the surface associated with the network or interpolated using the start and end nodes cover levels.
if this node to be shown in a profile the profile will fade out (white ghost) which is a way to notify users to update it with the command UU.
Note: if only vertex is to be added not a node, then standard ACAD procedure can be used (select the pipe, bring the pointer near the center grip …. etc.)

Delete Node
Node can be deleted and the connected pipes will be processed per the user choice as shown in the dialog box. Joining Pipes will create vertex at the node location. 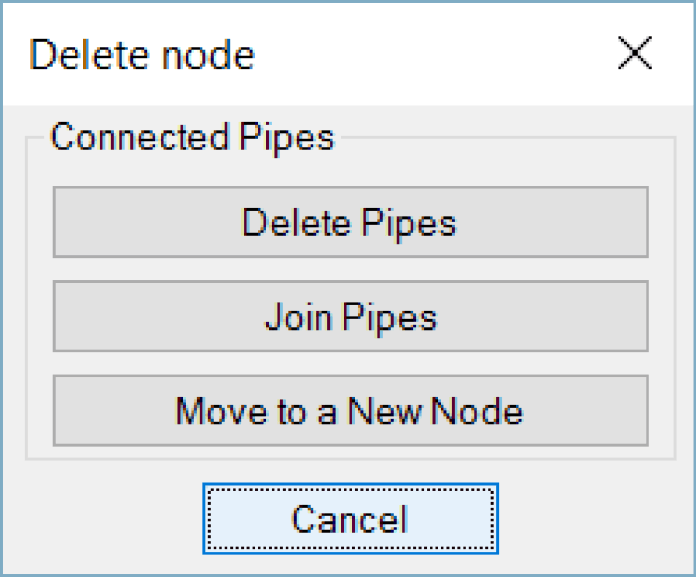 All Branch Numbering
Nodes of gravity networks can be numbered automatically including all branches and sub-branches. Numbering will follow the flow direction from Downstream to Upstream. the numbers can be assigned to the Node ID, the Node Label or Node Tag. Creating profiles when selected will create profile for all the main and sub-branches.

Quick Numbering
Similar to the previous command but this one to be used for one line from the selected first node the selected last node. 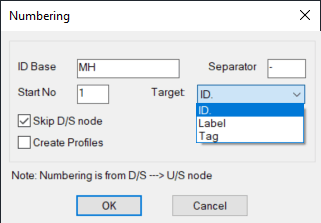 Re-insert Nodes
Redefining existing nodes with updated one may not be as intended. with this command the old one will be deleted and the new one will replace it maintaining same data.

Copy Annotation to Pipe
This command will try to parse text near the nodes and update node data. the command uses regular expressions to figure out the information, for example this expression %%[Cc]* means lines start with diameter symbol will be copied to the pipe as diameter. IL* means lines start with IL will be considered Invert level of the pipes connected to the node, The command will try to figure out the Outbound pipe to copy the text to it if required otherwise it will prompt the user to pick the correct pipe, and so on. 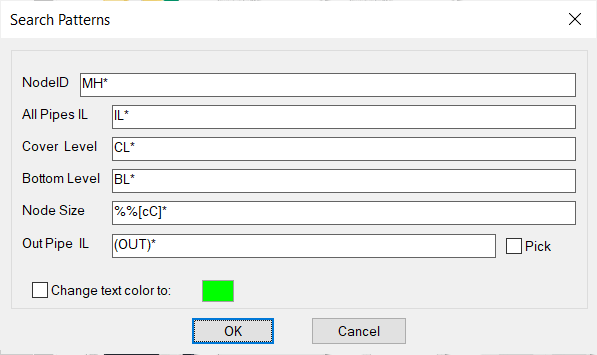 With this command node properties, levels and location can be updated from CSV file. updates will be based on the Node ID or the Node Label, and they must be unique otherwise updating based on property with duplicated values will lead to importing wrong data to the wrong nodes. 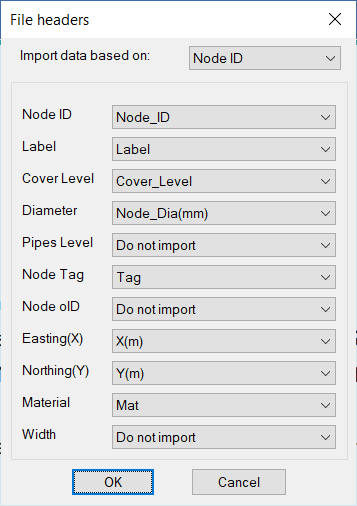